Guatemala ships to Russia the first…

25/11/2019 Russia is the new export destination for Guatemala’s fruit & vegetables. The Frutas Tropicales…

A new Gala variety was produced…

According to the World Pear & Apple Association in almost all EU countries the stone fruit output is expected to be less in 2019. WAPA experts report, apple crop would decrease by 20% from 2018 & reach 10 556 thousand tons. The situation in the Southern Hemisphere looks more favorable contrasted with the extreme volume drop in Europe. Producers of the Southern Hemisphere are going to crop 2% more apples & pears.

The current apple & pears EU harvest season became the main agenda of the Prognosfruit 2019, what took place in Alden Biessen, Belgium in the 7-9 August 2019. WAPA experts introduced the volume forecast for all global markets, inc. EU & Southern Hemisphere countries, in the current season & all trends analysis.

Experts think the 2017/2018 apple season became the best by volume in the past decade. The prices were lower than average in the past five years. The high last year yield in Europe has allowed decreasing the fruit import share. On the other hand, the previous season stocks haven’t been sold yet & would be highly likely in retail in the current September in line with new crop fruit.

So, the volume decrease in EU countries would reach nearly 20% compared the past year. This forecast is resulted by the output decrease in such countries, as Poland (-44%/-2100 thousand tons), Germany (-17%/- 181 thousand tons), Hungary (-42% /-330 thousand tons) & Romania (-25%/-106 thousand tons). Poland is the leader of EU market & is keeping on the top in the current season with the volume of 2710 thousand tons. In Italy, which ranks second in volume, WAPA experts report about the gross apple output is expected to overpass 2195 thousand tons, what is 3% less than last year.

Experts think the weather conditions caused the output drop. 2018/2019 Apple season is seemed to be one of the most severe due to the long heatwave, hail storms, dry weather and abnormal temperature fluctuations. The share of small sizes on the EU market is expected to grow because of the weather. So, the experts forecast the higher prices for 75-80-85 sizes. The shelf-life is expected to be longer compared to the last season, what affords to increase supplies to the Latin American & Asian countries. The growing Indian market looks the most attractive for European producers.

The apple crop in Latin America would be 2% more than last season. If the volume in Chile hadn’t decrease by 5%, the result would be better. Chile is leading the Southern Hemisphere market, so, the output drop in the country affects the regional marketplace. The other countries report about output growth on average by 5-9%. The total apple production of main exporting countries of the Southern Hemisphere would reach 5261 thousand tons according to the experts.

Golden Delicious will stay the most popular apple variety in EU with the market share of 22% & volume of 2327 thousand tons. Experts expect the output decrease by 3% compared to the past season. The total crop of the second by volume variety Gala will stay in line with the past season & amount 1467 thousand tons. The slight increase in 2019 is forecasted for new varieties (+10%) & such varieties as, Cripps Pink (+9%) & Fuji (+2%). Such traditional EU varieties, as Idared (-53%), Jonagored (-60%), Jonathan (-50%) & Jonagold (-25%) are expected to drop considerably. The total output drop of these varieties would amount 1175 thousand tons in 2019.

Gala leads the Southern Hemisphere market with the volume of 1949 thousand tons, what makes 37% of total market apple crop. According to the experts the local producers will harvest 7% less fruit of this variety in 2019. In other traditional varieties, such as Fuji (+22%), Golden Delicious (+4), Red Delicious (+3%), Granny Smith (+4%) & Cripps Pink (+1%), the substantial increase of production is forecasted. 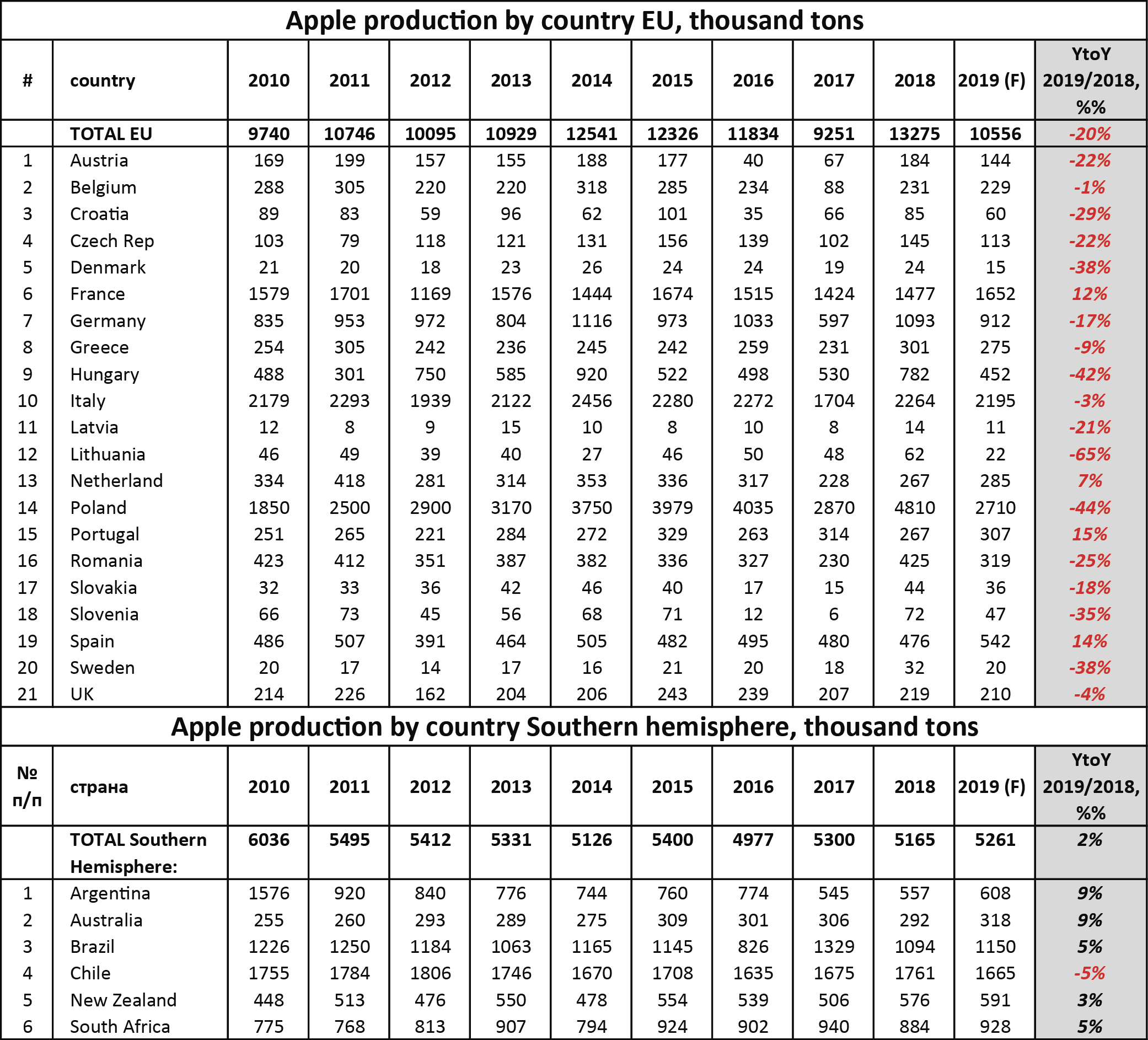