Guatemala ships to Russia the first…

25/11/2019 Russia is the new export destination for Guatemala’s fruit & vegetables. The Frutas Tropicales…

A new Gala variety was produced…

Senators & market players offered to limit the apple import during the harvesting season (since September till March) in order to protect home producers against unfair competition. Theproposedmonthquotarateis40%.

Historically apples became one of the main fruit on the Russians table. That’s why the protection of home apple market is so important in the context of food security as well. In spite of the growing local production, the import share is still great in the Russian market.

According to the Ministry of Agriculture, Russian producers harvested nearly 1,75 million tons of apples in 2018. 985 million tons of them are of table varieties. As estimated by the National Union of Fruits-and-vegetables Producers, commercial farm unit crops took nearly 1 million tons. Import volume amounted nearly 850 thousand tons according to the Federal Customs Service. So, the share of local production in the Russian market amounted about 67%. The balance in sale cropping segment is quite different, because the apples of table varieties are mostly importing. Thus the ratio of local & importing production is quite different. The local apples take about 54%, while foreign products make 46%.

The government concern about current situation in the apple market is borne in after the figures analysis. By the results of Parliament proceedings devoted to the problems & future development of Russian  fruit-farming, the Council of the Federation Committee for Agrarian and Food Policy and Environmental Management recommended the Government to delegate Minpromtorg with the participation of related authorities, unions, scientific organization & associations, working out of activities for protection of home market against unfair competition from the foreign producers. Among the others import limitation package was on the table. Such activities, as: seasonal import quotas for some kinds of fruits-and-vegetable crops (including apples), the rise of import duties, import volume limitation during the local season, were discussed.

According to Anatoly Kutsenko, the President of National Union of Fruit & Vegetables Producers, import quotas imposing will let us to decrease the apple import offer in the period, when local production floods the market (since September till March).   As Anatoly Kutsenko said, the ratio of local & import products in the market should be about 60% to 40%. The Union thinks, quotas should be imposed in the first half of the year, because it will help to support the local growers & raise their profile in the market.

Unfortunately, there is the lack of information concerning the basic volume for calculation of quotas rate. It may be based on the total apple production or sale cropping volume. It’s not clear, how the monitoring of local & importing ratio will be carried out. Let’s hope, public authorities & market players will invent valid follow-up mechanism by the moment. And consumers would not buy favorite fruit at an overvalued price due to the gap in the market.

According to the Ministry of Agriculture of the Krasnodar Region, the apple import should be stopped or limited greatly since the late August till the end of January. Of cause, if there’s no suspending events.

The so-called “grey import” also causes concern. According to the Council of Agriculture of the Federation Council “it makes the large amount”. The Council of Agriculture recommended to the Government to consider possible steps of expansion of Rosselkhoznadzor power in monitoring of foreign producers, growing fruit crops for Russian market at all stages from field to market. Due to this, the certification & phytosanitary security control over the importing products is expected to be tightened. Kutsenko thinks, “it’s necessary to return Rosselkhoznadzor foreign suppliers verification and validation function”.

“The tariff quota tool should be used & apples should be delivered to Russia, based on the forecast of local offer & demand balance,” – said Anatoly Kutsenko to “Agroinvestor”.

By the rate of consumption, approved by the Ministry of Health, the demand in fruit & berries for Russian people amounts 100 kilos per man year. Apples take 50 kilos of it. As estimated by the First Deputy Chairman of the Council of the Federation Committee for Agrarian and Food Policy and Environmental Management, Sergey Mitin, the potential apple market capacity is about 7,3 million tons. The present offer supplies nearly 50% of demand in fruit & berries, what is far less than the similar indexes of some developed market economy countries. The real demand is more less, nearly 27% at average, the Parliament proceedings packs say. So, the market potential is very high. But the country’s economic situation & purchasing power should be considered.

In ideal conditions the local apple production is able to place the importing products up to 2023 according to the forecasts of Fruits-and-vegetables Union. Kutsenko said, that the apple import should be decreased at 130-150 thousand tons per year in order to promote home production. “It will give us possibility to form proper prices & recover the expenses of farmers, “- Kutsenko considers.

Let there be a garden or State support for local producers.

Kutsenko said that it’s necessary to specificate attributes, which characterize “traditional”, “intensive” & “super intensive” garden in order to increase the effectiveness of provided support & to estimate the current situation in the sector properly.  According to the President of the Union it will let to differentiate the lending support. These points are on the front burner for the market players as well. The share of commercial apple in intensive garden is much more (75%), than in traditional type (40%). The outlay in setting out gardens of various types is also distinctly different.

As explained Yuriy Belov, the Chief Executive Officer of «AFG National Agro Holding» to AGROINVEST, there had come to a long-awaited decision in 2018 concerning the differentiation of grants for partial reimbursement of perennial fruit plantings setting out, depending on the planting stock per hectare. “Two grades were instituted: one is 800 to 2499 plants, the other is more than 2500 plants. But in the super intensive garden plant population is 2,8 to 7,6 thousand per hectare, - he specified. – So the share of grant-aided costs for super intensive gardens still stays far less, than for other types, even the graded grant included.”

According to participants of the Parliament proceedings, the investment raising proves key in seed-plot development. The total gardeners demand in plants is rated by the Minselkhoz as 30 million units. The import amounts 19,8 million units.

The essential step of the sector competitive growth is the tax burden reduction. The participants of the Proceedings considered a possibility of VAT rate deduction for fruits-and-vegetable production from 20 to 10%. The technical equipment of horticulture is also key point. The usage of importing tooling & machines decreases the sector marketability & profitability, increases the products prime cost.

The development of storage system is the way to save the crop.

Russian weather conditions afford to grow only one crop annually. At the same time consumers got used to have fresh fruit on the table all year round.  In order to take a foothold on the market, the home producers have to develop the storage system capacity. As estimated by the Minselkhoz, the current crop storage possibilities include 182 fruit stores with the capacity of 444 thousand tons. Less than 40% of them are equipped with cold-storage facilities. By comparison, this index for EU countries is 85%.

According to the Fruit-and-vegetable Union the fruit storage capacity should reach 1,8 million tons till 2025 in order to achieve the planned increase in apple production. The Union offers the set of actions for that. It includes: the increase of the share of direct capital outlays recovery to 50%; to give grants for fruit stores building, valued of 60% of the item projecting costs, connecting the setting out of perennial plantings to the building of private fruit stores or their lease. It will let to prolong the season for home producers & to increase the average sale price, what means the sector profitability growth.

Currently, the size of fruit store building costs recovery amounts 20%. The Cuban Minselkhoz thinks it’s not enough. All the more, these funds are hard-to-get for growers. Authorities think it’s necessary to consider the possibility of simplification of grants getting rules & the increase subsidy rates to 80% of the real fruit store building cost. The current lack of fruit store capacity in the Krasnodar Region is 150 thousand tons according to authorities estimate. 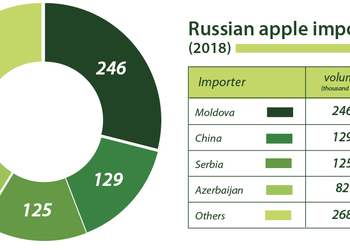